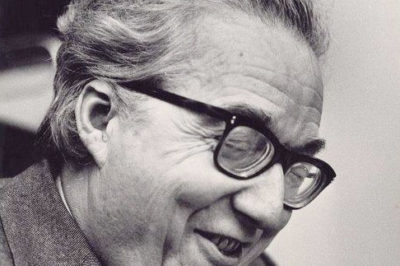 Déodat Roche may not be the only modern Cathar. Another candidate put forward for such a distinction is ‘Raymond Abellio’. Raymond Abellio is the pseudonym of French writer and political activist Georges Soulès. Already, in his choice of nom de plume, there is a direct reference to the solar deity of the Pyrenees, often linked with Apollo – and Lucifer, the Light Bearer. It was, in fact, Otto Rahn himself who made the link between Lucifer and Abellio.

Abellio was a deity of Soulès’ homeland, especially the Garonne Valley in Gallia Aquitania. His existence is known through a number of inscriptions that were discovered at Comminges. He may have been a god of apple trees. Equally, though Raymond is a name of Germanic origin, composed of the elements ragin (‘counsellor’) and mund (‘protector’), the name was, at the time of Catharism, specifically linked with the counts of Toulouse. The choice of protector and counsellor of the deity of light is apt to describe what Soulès envisioned to be his mission in life.

Soulès was born November 11, 1907 in Toulouse, and died August 26, 1986 in Nice. His parents came from Ax-les-Thermes, in the Ariège valley, only 16 kilometres from the ancient Cathar castle at Montségur. Soulès was a brilliant student, and during his engineering studies discovered an interest in politics and became a staunch supporter of Marxism. He joined the Étudiants Socialist of the XIV arrondissement of Paris, affiliated to the French Socialist party (SFIO). Here he befriended the celebrated political philosopher Claude Lévi-Strausse. Amongst his tutors was Marcel Deat, the politician and philosopher who formed his own party, the Parti Socialiste de France, under the motto ‘Order, Authority and Nation’.

In 1931, at the age of 24, he joined the Centre Polytechnicien d’Études Économiques, popularly known as X-Crise. The aim of the group was to study the political and economic consequences of the 1929 Wall Street crash. One of the results of this study was his adoption of ‘Planisme’, a political philosophy that embraced centralised control of the economy and key services, such as power and transport, which today remain pillars of most socialist governments.

According to Guy Patton, author of Masters of Deception: “It appears that the Planist approach offered the best route to a French national renewal and a change in France’s economic fortune. He wanted to replace the famous Republican slogan, ‘Liberty, Equality, Fraternity’, with ‘Prayer, War, Work’, to represent a new society built on an absolute hierarchy led by a king-priest.” It is therefore apparent that Abellio did not want to stop with bringing socialism to power, but had a much greater vision for France.

Abellio was also on the board of the Atlantis magazine, founded in 1926 by Paul Le Cour. Le Cour was to be an inspiration for Pierre Plantard’s political and esoteric philosophy – the illustrious Priory of Sion. Le Cour himself was the heir of the Hiéron du Val d’Or movement, which campaigned for the return of a priest-king to rule France. All of these organisations, however diversified they might appear to be, had one common denominator: the return of a New or Golden Age, and it is here that they link up with Abellio’s vision for France.

In 1947, Abellio’s ‘Vers un prophetisme nouveau’ specifically called for the formation of “a grand order consisting of a community of initiates under the direction of a man with a sense of mission.” The question, of course, is: initiates of what?

Abellio wrote two books in the Gnostic genre, entitled Manifeste de la nouvelle gnose (Manifestation of the New Gnosis) and Approches de la nouvelle gnose (Approaches of the New Gnosis). He explored the possibility of a secret numerical code in the Bible, a subject that he developed in La Bible, document chiffré (which could best be translated as ‘The Bible Code’!) in 1950, and later in Introduction à une théorie des nombres bibliques (Introduction to a Theory of Biblical Numbers), in 1984. He proposed in particular that the number of the Beast – i.e. the Devil – 666, was the key number of life, a manifestation of the holy trinity on all possible levels, material, animist and spiritual.

Abellio’s writings all underline his ideology, which is that there is an ongoing process whose final term he called the “assumption” of the world’s multiplicity into the “inner Man.” Man was supposed to be able to achieve the complete unification of that multiplicity, a unification that would end up providing the subject with a “gnostic consciousness,” also called “secondary memory,” by the same token leading to the “transfiguration of the world.”

So far there is little evidence that Abellio might have been a Cathar. Whenever his ideology is explained, there are references to the influence of Pierre de Combas on his thinking, as well as his interest in Oriental philosophy, the Vedas, and eschatology. Indeed, it is only in Jean Parvulesco’s Le Soleil Rouge de Raymond Abellio (The Red Sun of Raymond Abellio) – and then even in a somewhat secretive manner – that the notion that Abellio likely had Cathar allegiances rises to the surface.

Parvulesco is a writer and French journalist, an heir of “Traditional thinking,” in line with other esoteric authors like René Guénon and Julius Evola. He knew Abellio personally and could penetrate into his inner world – see his ‘true self’, which was an important part of Abellio’s philosophy.

It is in the chapter “The Final Secret of Raymond Abellio” that we find – unexpectedly – two direct references to Catharism. But before doing so, Parvulesco opens the chapter by underlining that Abellio died in an “immense solitude.” He then writes how “Raymond Abellio never stopped to be, secretly, and whether he himself knew or not nevertheless is important, the ecstatic and suicidal ecstatic of Montségur, whom carried inside himself the mission for this life and for all lives to come.” He continues: “And, on the other part, he, so long amongst us as the confidential agent of the other world, is going to try to be, now, our confidential agent in the other world.”

The first paragraph is a rather awkward method of writing and it is almost as if Parvulesco is about to fall over his own words, trying to express something that is very intense. Parvulesco nevertheless makes it clear that Abellio had a mission, which he links with Montségur, and though some might argue Parvulesco used the castle’s name because it was near to where Abellio’s family originated from, that actually doesn’t work within the context, with references to suicide – noting that suicide was specifically linked with the Cathars besieged at that castle during the siege of Montségur. Even more specific: Parvulesco implies Abellio’s mission is specifically linked with Montségur – known for one thing only: the symbolic demise of Catharism.

Two pages later, and totally out of sorts with the tone of the book and chapter, Parvulesco introduces the Consolamentum. Parvulesco is at odds to explain the end of Abellio’s life, why he died in total isolation, and is unable to come up with a logical answer – except one: “the only answer that I can support is not the least: […] it is in the mystery of this sacrament instituted by the Consolamentum of the very perfect that it is where we need to search the reasons of his mystic complicity with the arrest of death that concerned him, and about which he did not ignore the promises of deliverance, the suspension of the movement of the penitential wheel of the blind lives. But let us not talk about that which is so savagely prohibited to be spoken of.”

Few have read this sole paragraph for what it really states. Not only does it refer directly to the fact that Parvulesco knew what Catharism meant – the end of the series of incarnations – and that such things should not be spoken of, but he specifically notes that it is in this framework and especially in the sacrament of the Consolamentum that one should search for the reason why Abellio died in the manner that he did. In short, Parvulesco states that Abellio died in total solitude, as he died after receiving the Consolamentum; the total isolation being nothing else but his Endura.

These two paragraphs are powerful evidence, by a person who knew him, that Abellio was indeed a Cathar. In two paragraphs, Parvulesco sums up the life of his friend as that of a man who was born with “the mission of Montségur” and who died in conformity to the Cathar rituals.

These paragraphs also put another episode in Abellio’s life in context: a theatre play entitled ‘Montségur’, which was about the Cathar Crusade. In the play, he set off the conflict between knowledge and power on the one hand, as well as an awakening and the part it played in a particular mindset. Was it his awakening and his mindset?

As such, all of his interests in the Bible, as well as Oriental philosophy, should be seen for what they were: the interests of a Cathar, who realised that the Bible and these philosophies contained ideas that were similar to his own – those of Catharism. These interests should not be seen – as most interpret them – as those of a social activist who went in search of a larger religious framework. It was a confirmation of his belief, rather than the exploration of beliefs to eventually pick one that suited him best.

Equally, as Parvulesco underlines, perhaps we should see his social activism and his struggle for a New Europe as his ‘mission’ – a mission that equally was part and parcel of the Cathar social agenda of medieval Europe. Though Abellio has often been labelled a synarchist (i.e. a man who proposed that the world be ruled by a secret elite – his ‘initiates’), it may be that he realised that after the fate that befell Catharism in the 13th century, rule by secrecy may have been the only method through which his – if not their – social reform could ever be accomplished. Hence, we need to ask whether his struggle – and that of those like him – is another Cathar revival.

Soldiers already lost in a war that becomes ever more total, ever more occult, we bear at the very edges of this world the spiritual arms and the most enigmatic destiny of military honours from the Beyond. In the ranks, both visible and invisible, of the Black Order to which we belong, those whom death has struck down march on side by side with those who are still standing.
– Jean Parvulesco, La Conspiracion de Noces Polaires